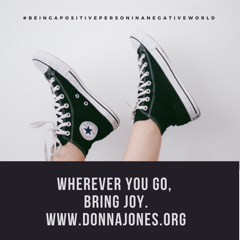 Are You Ready to Be a Positive Person in a Negative World?

“Did he just flip you off?”

“Why? You weren’t doing anything wrong.”

“I know, but apparently something I did bugged him”.

“Wow. Talk about an anger issue.”

So went the conversation between JP and me Sunday afternoon…

We were in a great mood, chatting happily on our way to a wedding. I was driving–not too fast or too slow. I wasn’t weaving. I didn’t cut anyone off. I was simply driving in one lane, at one speed.

So when the motorcycle driver sped by me with his middle finger held high, and a look of fury on his face, JP and I were both shocked. Neither of us knew what I’d done to merit his anger.

But as the cyclist drove off, his negativity lingered. I found myself quickly moving from shock, to disbelief, to acceptance, to disgust.

And then to anger.

For the briefest moment I wanted to hurt him (How dare he flip me off for no reason! Road rage, anyone?) I’m ashamed to admit it, but there it is. Real and raw.

And that’s the way the cycle of sin and negativity works. Someone lashes out at you; you lash back. Anger breeds anger.

Unless someone (Like me. Like you.) decides to do what is decent, rather than what is deserved.

Why do I bring up this story? Because you know the feeling. And you understand the choice that lies before you every single time you’re faced with someone else’s negative behavior, just as surely as I did.

It can be hard to be a positive person in a negative world.

As much as we’d like to be positive, when slapped in the face with other people’s negative actions or attitudes, it takes intentionality not to respond in kind.It takes a person who refuses to let destructive behavior win and destroy all that is good.

Yes, negative actions can set in motion a destructive cycle.

But so can positive ones.

Just look at the way folks are rallying to help the victims of Hurricane Harvey.

Smack dab in the middle of devastation, kind-hearted people offer hope and help. They choose not to be overwhelmed, but to overcome.

Which brings me back to the motorcycle situation. Negative actions and attitudes can be as destructive as natural disasters. Please don’t think I’m minimalizing the devastation of what’s happening to victims of Hurricane Harvey; it’s just that our nation, our homes, and our social connections have been hit hard by the hurricane of anger and hate—now, more than ever. Just as physical hurricanes leave chaos in their wake; emotional and verbal hurricanes do, too.

But positive actions and attitudes can be as healing as negative ones are damaging.

So as we pray, give, and help the victims of Hurricane Harvey, let’s emulate the spirit of kindness we see, and take it one step further.

It shouldn’t take a hurricane to bring out the kindness in each other.

For the next few weeks I’ll be sharing two minutes tips on “Being a Positive Person in a Negative World” on Facebook Live. If you don’t already follow me on Facebook (Donna Jones, Speaker & Author), join me, and others, who desire to inspire the positive and bring kindness back in style.

And no matter what chaos comes our way today, let’s choose to be positive people in a negative world. Wherever we go, let’s bring joy.

Be kind to one another…